The Story of  Top Ten Tapers 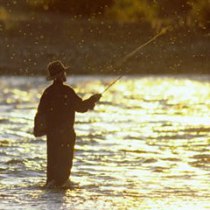 I was a fly fisherman and had never owned or even touched a bamboo rod before 2002. Then, I accidentally came across an old bamboo fly rod. One of the tips was split and the rod was in relatively bad shape. The rod sock was dry rot. Guides were missing or tarnished. I was curious as to how a bamboo rod felt to cast, so I bought it anyway and took it to a famous local cane rod maker. We struck a deal for him to restore it. He reported that it was made circa 1933 and has collectable value. Instead of keeping it safe and on display, I use it on the stream, because of how it feels in my hand. I then began consciously looking for old bamboo fly rods in poor condition.

A few years later I came across a second rod, and purchased it. When I took it to the same rod maker, he refused to restore it, saying that it had no collectable value, and that it was not worth his time. I was disappointed because I had planned to give it to my college age daughter, who had been my fly fishing companion on many trips. Then I had a sudden burst of inspiration.

"I will buy all the parts from you if you teach me how to restore the rod," I said.

Although the books were daunting at first and it took me three months, I did. Fortunately, I have a degree in engineering and could understand many of the manufacturing techniques, and the technical reasons for them.

I made an appointment to meet him, purchased all the parts, and asked him many questions about what I had read, which he was gracious enough to answer. In the last decade I have taken that knowledge and restored and repaired more than a few bamboo fly rods for friends. My rod making skills improved dramatically as I undertook this work.

In 2014 I purchased a Payne #100 taper bamboo rod blank to build into customized rod to present to my grandson as a Christmas present.* This taper was developed by Jim Payne and first sold by the E.F. Payne Company in 1931. It is considered one of the 10 best tapers of all time. When I first cast this rod, I fell in love with it. I own several successful corporations, but am approaching retirement age and decided that I would seize this opportunity to turn my passion for fly fishing into yet another business. I designed and had four custom fixtures made to split the bamboo culm, make an equilateral triangle, wind the glued pieces together, and taper the rod. So here we are!

* The day after Christmas I took him outside and taught him to cast to a four count rhythm (like in 'A River Runs Through It'). He is only 6 years old, but out of his first 3 dozen casts, one was bad, ten were perfect and the balance were good casts. He almost couldn't make a bad cast with this rod. I had not expected this and was astonished to say the least.

Please contact us if you have any questions or come to our booth at trade shows if you want to try out a bamboo rod.