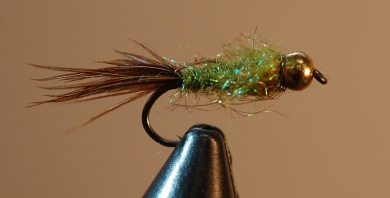 In late May of 2006 my daughter and I were fly fishing in Pine Creek near where it empties into Oil Creek near Titusville, Pennsylvania. I was fishing with a restored, vintage 1930s, bamboo rod. We had been fishing for about two hours when an old fisherman, who was walking through the woods behind us stopped, and watched me cast my bamboo rod for a few minutes. I noticed him and his intense interest in the rod, so stopped casting. I waved at him to come closer so he could see the rod’s details. I told him about the history of the rod.

“I would like to do that very much,” he said. “I’ve never cast a bamboo rod before.”

I handed him the rod and gave him a few tips about the differences between how bamboo and graphite feels and casts, and let him fish my water. After he covered the pool (with no hits) he reluctantly gave me the rod back.

“I’ve fished this creek for the last 20 years”, he said. “And developed a special nymph pattern that will catch fish in this creek when nothing else will work.” He showed me one and then gave it to me. He urged me to fish with it.

“Thank you very much,” I said examining the fly, and wondering at the magnitude of the gift if his claim was true.

As he was walking away, I was tempted to put it on my line right away, but the risk that I might lose it gave me pause. After some thought, I finally decided to save it. I turned to wave goodbye and thank him again, but he was already 25 yards away. He never looked back and I never did get his name.  I took this fly home and spent the next few days reverse engineering and improving it.

I have fished this pattern for many years and found it to be very productive in the creeks of Western Pennsylvania and elsewhere. I am convinced that his claim was true. The fly, which I call the Pine Creek Sparkle Nymph, is as follows:

1. Place the bead on hook – small opening towards the eye.

2. Wrap the hook with 10 turns of wire, pushing wire up into bead. Secure with thread.

4. Dub the 1:1 mixture from the back towards the bead, ending at about ⅔ of the length of the hook. A dubbing loop using a dubbing tool works best.

5. Attach one end of the Pearl Flash to the hook where the dubbing ends.

6. Dub the 1:1 mixture the remaining distance to the bead. Make this section larger in diameter. Tie off, but leave the excess dubbing as loose strands towards the front.

7. Pull forward the Pearl Flash over the top and tie it in at the bead. Trim excess with razor blade.

9. Tie off thread, secure with glue and trim hackle back to the tip of the point.